Kyubei Kagaya’s roots as a Japanese craftsman dates back to the Edo period, after he was fascinated by the beautiful glass that was brought into Japan from Europe. Mr. Kagaya then started engraving glasses with emery powder and it is said that this was the origin of EdoKiriko.While Satsuma Kiriko was being produced as one of the industrial products under the patronage of the Satsuma Clan, Edo Kiriko was being produced and hand made by the common people.
During the Meiji period, not only did the government decide on apolicy to introduce western culture into Japan, but they also made glassware as one of the national industries. Satsuma Kiriko craftsman joined factories in Tokyo and they were able to produce Edo Kiriko while still utilizing the Satsuma art skills. Rapid progress was being made after Western style grinder was replaced in lieu of hand-cutting processand oil engine was used as source of power.
Kiriko can be classified into 2 types, Suki-glass (transparent) and Kise-glass (covered with colored glass).Edo Kiriko is characterized by its slightly colored glass with sharp cut, and Satsuma Kiriko has thick colors on semitransparent glasses. There are many kinds of cutting designs for Kiriko such as Nanako(fish scales), Kagome(basket weavepattern), Asanoha(hemp leaf), Kiku(chrysanthemum), Koushi(lattice), Kaben(petals) and so on. Nanako was also a typical cutting design in England and Ireland during 18th-19th Century.
After the World War I broke out in Europe, European glassware was no longer being imported thus placing a higher demand for Kiriko. As a result, there was an increased production of glasses and tableware which made Kiriko a big success.
There was a sudden decrease in glass factories after suffering from the repercussions of World War II. Although Kiriko craftsman were forced to face the harsh reality of mass production of glassware by machines, they were ultimately able to continue to keep the Kiriko tradition alive and produce great work with the help of union and their recognition as the traditional artistic handcraft.
When the World War I broke out in Europe, the imports of glassware from Europe stopped. Consequently the domestic demand for glassware increased, and a lot of glasses and tableware were produced and came onto the market.
In the Showa period, owing to the World War II, the number of glass factories gradually decreased. After the war, glassware was mass-produced by machines and the situation got worse for Kiriko. However, the guild of Kiriko craftsmen was formed and Edo Kiriko was authorized as the traditional artistic handicraft by Tokyo. Its tradition has been handed over to the next. 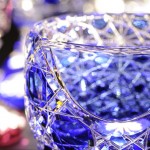